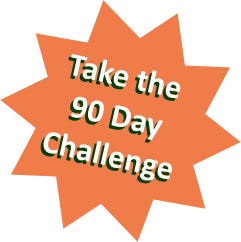 Quite a while ago I heard an amazing audio cassette (YES!! A Cassette!) by the good Dr Joel Wallach. It was his question “Hey, Pops, how come we go to all that trouble for those calves and not for ourselves?” – this was in regard to the minerals added to cattle feed to make sure of good production of whatever kind – be it meat or milk!

As an ex-farmer of some few years ago – I thought WHAT a good question!

Proper nutrition is the bedrock to good health and that is all there is to it. Well, I guess the fact that plastering chemicals and other substances on your body to look and smell good does have another relevance. But top line nutrition is the one and we don’t make it happen in most cases with a great majority of people in the modernised world.

However – more on that elsewhere in the website and in future – I just thought a short article from Dr. Joel Wallach’s website might be of interest, plus a VERY interesting audio just here:

Dr. Joel Wallach has been delivering a message of good health and long life to American for years, a message that can really affect the lives of those who hear him speak. Millions of people have heard his very popular audio cassette called “Dead Doctors Don’t Lie”, and many others have been reached with his message of good health through good nutrition on his nationally syndicated radio show. Dr. Wallach commits himself to over 300 speaking engagements a year, in a further effort to get his message to all of us. I sincerely hope that you’ll be on your way to achieving the ultimate in good health after you listen to this tape. Here’s Dr. Wallach.

I grew up on a beef farm in Missouri, and like everybody else that raises livestock, we raise a lot of our own feed to stay in business. And we raised corn and soy beans and hay, and we grind this stuff up into a flour and we add vitamins and minerals and trace minerals make pellets, and we feed those calves for about 6 to 9 months, and then we ship them off to be butchered, or maybe to other feeders, and you only save back the best ones for yourself. And you knock them in the head and eat them. It’s a real simple cycle on a farm. The thing that fascinated me as a teenager was that we went to a great deal of trouble for those calves, and yet, as a family, we ate out of the very same fields. We keep back 5 rows of corn for ourselves. We had a garden at the end of the field where we grew our peas and beans and squash and tomatoes, and we wanted to live to be 100 with no aches and pains, and we didn’t give ourselves the very same vitamins and minerals and trace minerals that we gave the calves. Now I used to ask my dad, “Hey, Pops, how come we go to all that trouble for those calves and not for ourselves?” And he would say “Shut up, boy. You’ve got farm fresh food, fresh air, lots of free exercise. Don’t ask complicated questions.”

And I was glad to get rid of the farm exercise and go to Ag school at the Univ. of Missouri, where my major was in animal husbandry and nutrition, my minor was in field crops and soils. And I began to learn technical things about soil chemistry and how related to tons and bushels per acre, and ag economics. But I didn’t get the answer to my basic question until I became a freshman veterinary student at the Univ. of Missouri, and there I learned the reason why we put all these vitamins and minerals and trace minerals in the animal feed, the bottom line, is because we don’t have insurance for them. We don’t have Blue Cross, Blue Shield, major medical, hospitalization, Medicare, Medicaid, and if we were to use a human healthcare type of system for animals, it would be a sticker shock for you. Your hamburger would cost you $275 per pound. Boneless, skinless chicken breast, $450 a pound, a dozen eggs would be $50, just to pay for the healthcare. So we learned that we could keep the price of animal products such as meat and dairy and poultry and eggs down to where the average American could afford them simply by significantly reducing or eliminating health care costs. And we do that in animals by preventing and curing diseases with nutrition.

Well, after graduating vet school, I went to Africa for a couple of years and got to work with Marlin Perkins, from the old Mutual of Omaha “Wild Kingdom” days. And that was a kind of a kick. Got to play Frank Buck, use a tranquillizer gun, tromp all over Central and South Africa for a couple of years. And then Marlin sent me a telegram and invited me back to the States. He had gotten a 7.5 million dollar grant from the National Institutes of Health, and this was more than 30 years ago, and this was to study pollution and ecology and the environment, and my job as the wildlife veterinarian on the project was to do autopsies of animals that died of natural causes in the big zoos around the United States.

I was supposed to identify or find species of animals that were ultra-sensitive to pollution. And we were going to use that animal much like the old coal miners used to use canaries. You know that goes, they take the canary down into the mine, and if methane gas or carbon monoxide would leak in the mine, canaries were more sensitive than men, and would drop off the perch and die long before the men were in danger of suffocating or blowing up. Well, to make a long story short, after some 12 plus years of working on this project, I had done 17,500 autopsies on over 454 species of animals, plus 3,000 human beings for comparison. And what I learned was, that every animal and every human being who dies of natural causes dies of a nutritional deficiency disease.

I got kind of excited about nutrition again, and I wrote 75 scientific papers on the subject. I wrote chapters for 8 multi-author textbooks. I Actually contributed a textbook myself. A thousand pages, 2000 illustrations, and through the news releases that were in the big universities I worked with, I was on 20/20 with Hugh Downs and Geraldo before he got his nose broken the first time. That was a kick. Then 1700 newspapers around the world through the UPI and AP news services. And with all this public exposure, with all this scientific exposure, I couldn’t get people in a position of authority, either in medical research, or in politics to get too concerned or interested in preventing or curing disease in human beings with nutrition just like we did in animals. Well, I got frustrated enough I went back to school in Portland, Oregon, became a physician, and I practiced there 12 years as a general family practitioner, and I sewed up chainsaw wounds, delivered babies, actually used everything that I learned in veterinary nutrition on my human patients, and it was no surprise to me that it worked just as well in people as it did in animals.

The one phrase that has killed more people than anything else:

You may have already seen this, but I want to bring that important video to your attention again – It is called the Mineral Depletion Video and everyone who CARES about their health and the health of loved ones really needs to see it – it is NOT a long video but it is a must see. 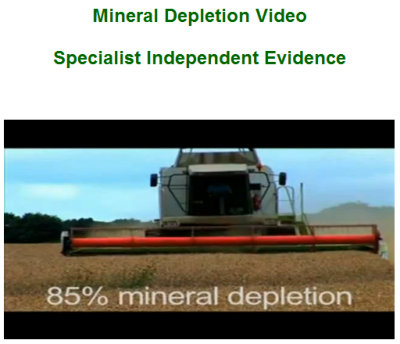 The related information in the graph below ALSO says a LOT…. 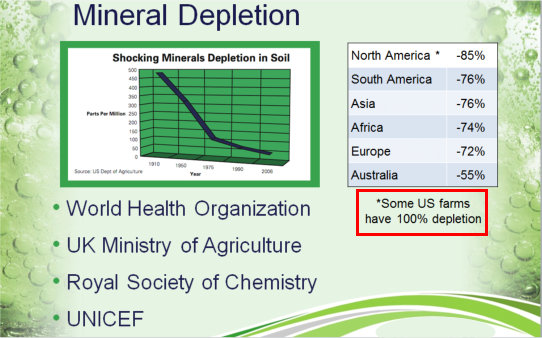