↓
Home→Uncategorized→Can You Guess What McDonald’s Food Item This Is? 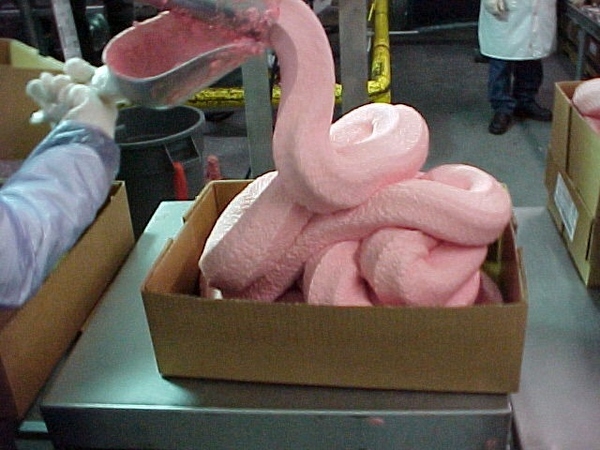 This post was noted in Facebook and I just thought it worth passing on as a web link….This is supposed to be food….and chicken at that! Looks like ice cream and the ingredients are really just …… well read on yourself and make your OWN mind up!

You have been served………….with mechanically separated chicken! Over a billion sold!

This is what fast-food chicken nuggets, processed frozen chicken meat, and patties are made of. BARF!!!!!

Here’s the creation process. What they do is take parts of a chicken and put it through this machine that mechanically separate the meat from the bone. Unfortunately, that doesn’t happen. What it does instead is smash EVERYTHING including the bones, eyes and guts making it come out looking like the picture above.

Since this meat is infested with bacteria, it will be soaked in ammonia in order to kill those little critters. But who wants ammonia nuggets? Not I and I’m sure you don’t want any either. So in order to mask the ammonia taste, they season it with a shit load of artificial flavors. [Yup, that will do it]
Right about now, I know what you’re gonna ask. “Hey Bruce? How do they get rid of the freakish pink color?”

Dude? That’s what dye is for. So in order to get people to devour this crap, they dye it with artificial colors in order to give it that white texture……more here….