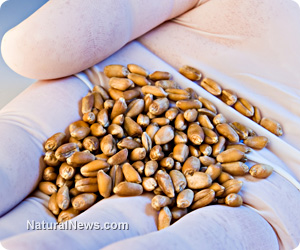 Yet again Natural News has an article on the machinations of that controversial Monsanto and connected industry chums. Let’s hope this will be a successful outcome for the impact study mentioned below..

Thursday, January 16, 2014 by: PF Louis
Tags:
(NaturalNews) It’s not a total ban, but it’s at least a victorious battle against the evil empire of Monsanto and the sociopathic biotech industry. After many months of grassroots demonstrating, blocking bulldozers and construction of a Monsanto seed factory in Argentina, a three-person court ruled two to one that construction of a Monsanto GMO seed plant must be halted until an environmental impact study is completed.

Of course, Monsanto is taking this decision to a higher court with claims that they did their own environmental study and the paperwork for construction on that site was approved by Argentine construction bureaucracies. They played the typical corporate rights card, which tends to appeal to individual rights philosophies even among libertarians, unfortunately.

The motivating force behind expanding anti-Monsanto demonstrations, including life-threatening demonstrations on the seed plant construction site, was the growing health problems near soy fields sprayed with Roundup. Farmers who sign up for Roundup Ready seeds are forced into using Roundup as part of Monsanto’s contract.

Monsanto’s end product is Roundup. It is primarily a chemical company. The birth deformities and spontaneous abortions that many farmers in the USA have reported in their GMO soy- and corn-fed livestock have plagued Argentine humans living near GMO soy fields.

The fields were often sprayed from the air. And mysterious illnesses were occurring among adults and children near those fields during the 12 years that Argentina had bought into GMO soy production to boost its economy.

Even an Associated Press investigation pointed to a clear link between the use of pesticides sold by Monsanto and worsening health problems in Argentina, as those pesticides both were airborne and polluted water sources.

While Monsanto claims that glyphosate is safe, and many international environmental, health and agricultural agencies concur, there is a sneaky little detail that’s omitted from their studies.

That detail is simply that glyphosate is not the only ingredient in their “proprietary” formula that is considered a trade secret, allowing Monsanto to play the corporate rights card stopping most from looking behind the curtain. Glyphosate is studied alone, not as part of formulas that use glyphosate with other ingredients.